Bageshwar is a one of the picturesque locations with huge attractions in terms of natural beauty and pious shrines in Uttarakhand. Carved out from the famous Almora district, this place remains proliferated with mythological importance, religious legends, awe striking scenic beauty and festive happenings. This beautiful holy destination lies at an altitude of 1004 meters amidst misty hills at the confluence of River Sarayu and River Gomti. Bageshwar district is one of the 13 prominent districts of Uttarakhand and the 3rd one, being least populated areas of the state. 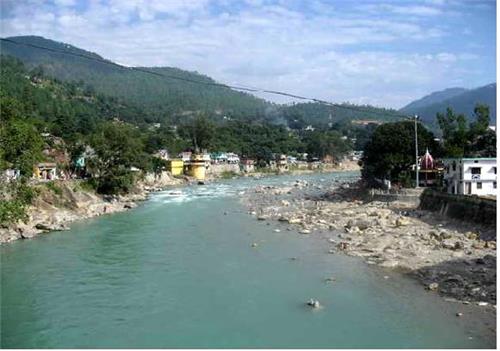 Bageshwar is often called as the “Abode of Gods” since according to the scriptures this place remains truly blessed by Lord Shiva or Sada Shiva. The popular shrines in this town are majorly of various avtaars of Goddess Parvati and Lord Shiva. The charming town has its claim to fame due its religious significance which pulls in millions of devotees from across the state and even beyond.

There is a little mythological story behind the origin of this religious town. The ancient-most temple of this town is based on the heartland of this area and is stated as Baghnath Temple. As described by the mythological legends in Skanda Puran, Rishi Basistha was bringing the Sarayu river as directed by Lord Brahma. Since Rishi Markandey was meditating it was impossible to bring the same. Rishi Basistha prayed to Lord Shankar for help in this difficult situation. Lord Shiva answered the prayers and came in the form of Bygra or Bagh and Goddess Parvati came in the form of cow or gau to the area. Bygra or Bagh attacked the gau and the gau cried for help which made Rishi Markandey open his eyes and help gau. As he left his meditating spot Sarayu flowed from there and pleased by his prayers Lord Shiva blessed Rishi Markandey and the pious place got its name. The name Bageshwar for the city was derived from the word "Byagreshwar" where Byagra means tiger and Ishwar means “God”.

Apart from spiritual sanctity, Bageshwar is also a exquisite location for adventure lovers and a trekker’s paradise. It may be noted that it was first Adi Sankaracharya who trekked through the gigantic Himalayas in 8th century AD and in due course opened the trekking routes here. Though till recently the trekking routes were only accessible in summer months but now it is open all throughout the year. The entry gate for the famous Kafni ,Pindari and Sunderdunga glaciers is through Bageshwar only.

Bageshwar, no doubt, is a place capable of freeing the mind of the eternal bondage of birth, life and death. For eternal time this place has remained as a symbol of faith for the generations of livelihood in Uttarakhand and even beyond. It has an immense spiritual impact and an unbelievable religious magnetism in Bageshwar which pulled in saints and patriots who were ready to sacrifice their life. Based between the Gomti and Sarayu rivers the Nilaparvat is believed to be the home of thirty three crore Gods of the Hindu religion with the presence of Vidhyadhar, Gandharva, Urvashi and many other prominent sages from the Hindu scriptures. It is believed that one who embraces death between Agni Kund and Surya Kund comes close to the Almighty and gains salvation under the blessings of Lord Shiva himself. According to Skanda Puran, this is the place where sages and even Gods came to meditate for Lord Shiva.

The famous Shiva temple of Bageshwar is known to be constructed by Laxmi Chand of the famous Chand dynasty. It is stated in a script that installing a Shiva Linga at this temple was absolutely a failed attempt for years which later was resolved by Shri Manorath Pandey of the small Palayn village who was successful in installing the idol after having sacrament before Lord Shiva on the pious day of Shivaratri. That is why a huge celebration is conducted here on that particular day every year attracting huge devotees across states.

Bageshwar is exactly located at latitudes 29º40' and 30º20' N and longitudes 79º25' and 80º10' E. Natural enclosures for the city would be Surya Kund and Agni Kund which forms the northern and southern part of Bageshwar while the holy Nileshwar peak borders the western part and Bhileshwar forms the eastern boundary. It is based in the eastern Kumaon region and in terms of neighborhood districts there is Pithorgarh district in the eastern and north-eastern side, Chamoli district in the western and north-western side, over viewing the gigantic snowy peaked Himalayas there is Almora district in the south. The nearest prominent cities from Bageshwar includes Almora at 76kms, Nainital at 150kms, Kausani at 31kms and Rudraprayag falls at a distance of 100kms from the city. However, the city is around 470 kms away from the national capital of the country.

The major climatic characteristic of Bageshwar is the semi humid climate that prevails almost round the year. Usually extreme conditions are visible in various seasons in Bageshwar. Usually summer months are warm from end of April to the month of June and temperature rises quite high in May where it may rise as far as 360C. However, at an average, in this season, the temperature remains around 250C. July to September forms the monsoon months when the climate remains extremely bad with humid weather making it absolutely unsuitable for tourist visit. October and November forms the best months here with pleasant weather. The winter season remains from December to February when the weather becomes chilling cold with temperature dropping way below -20C. The maximum never goes above 30C.

Bageshwar is basically a part of Kumaoni region as a result Kumaoni language is used a lot here. However, Hindi is the local language here and apart from this two English is also spoken here.

The pillars of economical growth of Bageshwar can be primarily divided into few major groups. First and foremost mode of income in this part of the state is agricultural business. Though major part of the area is mountainous it is the gentle hill slopes which are plain and much compatible for farming. Even the river valleys are fit for agricultural work where the major water resource are Gomti, Pindar and Sarayu rivers along with tributaries Lahor Nadi and Pungar Nadi. The main crops cultivated here are wheat, barley, maize, mandua, sawan, etc. It is the Gaur valley which is considered as the highest cultivated location in Bageshwar. Among all other crops the most yielded one is rice providing a huge contribution to the total production of the state.

Animal husbandry is also quite popular mode of earning in this part of the state. Cattles, buffaloes, sheep, goat all are maintained here to use the same in different modes of business. Apart from these small-scale industries, handicraft industries are also contributing in the overall economy of the district.

However, another most prominent mode of earning which has considerable contribution in the growth of Bageshwar is the tourism industry. With multiple prominent places to visit it is a hot location for various kinds of travelers like religious people, adventurous people, nature lovers and many others. Read More

Administrative set up of the district in quite good. The district was carved out Almora district and came into existence on 15th September 1997. The District Magistrate is the highest authority here. However, Panchayat Raj system is available here. The district has around 902 revenue villages which are divided into 35 Nyaya Panchayat areas or Judicial ones, 60 Patwar areas, 363 Village Panchyats and 519 Forest Panchayats. The district is divided into 5 tehsils and 3 blocks. The headquarters of Bageshwar district is Bageshwar Town.

Bageshwar has efficient police services governed by the Uttarakhand Police. The highest authority here is the Superintendent of Police, There are multiple police chowkis based in various parts of the district. The details are listed below

The District and the Session Court is the highest court in Bageshwar. Apart from this there are court of Addl District and Sessions Court, Court of Chief Judicial Magistrate, Court of Civil Judge, Senior Division and Junior Division, Court of Judicial Magistrate and Court of Civil Judge in Garur. These courts take care of all cases related to criminal and civil activities. Even for consumer forum cases there is a separate court for the same. For any legal services one may contact

The people of Bageshwar give great importance to the latent culture and their rich traditions. Even the fairs and festivals here are examples of their religious inclination and social values. The city has many religious shrines and the customs maintained here clearly portrays the spiritual mentality of the people here. Huge importance is given to art and proper initiatives are taken to retain the folk culture here. Annual fairs are termed as “Mela” here and they are conducted grandly here.

The lifestyle of the people of Bageshwar is majorly centered on religious sentiments. They value the traditional customs and rituals and prefer to enjoy the festivals of the city. But in spite of this, the inhabitants of the city are aware of the modern lifestyle and the latest ways of life. One can find a lot of lifestyle related services available in Bageshwar which include fitness programs or the salon and parlors available in the city or the beauty spas operating here. Some of these are listed below for reference:

Places to Visit in Bageshwar

Bageshwar is a place famous for its multiple well known pious shrines spread across the district. It is these temples which attract many pilgrims throughout the year and especially at the time of the festivals. Some of these temples go way back to 10th century and are quite famous ancient temples. Among them Baijnath temple and Bagnath temple has special significance among the devotees. Apart from this Chandika temple and Neeleshwar temples are also quite popular.

For the nature lovers the excellent scenic beauty of the Himalayas and the Pindari and Sunderdhunga glaciers are absolutely mesmerizing. It is the snow clad mountains and the serene environment that guarantees a lovely getaway from the din and bustle of the busy cities. For adventure lovers there are excellent trekking routes Pindari Glacier trek and Sunderdhunga Glacier trek. Read More

The society of Bageshwar is a mixture of multiple cultures and people of various caste and creed. The city has people from different class, genre and status and with different financial status. Even the backgrounds of the people are different. In such a scenario it is important to maintain a balance and facilitate the under privileged class with enough amenities for their growth and development. It is everybody’s right to have a better living and that is assisted and made possible by the various NGOs and social organizations operating in Bageshwar.

Some of these are listed below for reference

NGOs for Women
Women empowerment is one of the most important social issues in today’s date and to support that there are several Ngos for women in Bageshwar. These NGOs work towards a better life for the women of the area, by providing them proper education and working knowledge on handicraft work.

NGOs for Senior Citizen
For the better and healthy living of the senior citizens of Bageshwar, there are some prominent NGOs working with excellent reputation. Two of them are listed below

Bageshwar is a city quite popular in tourism industry especially for its unparallel attractions, religious and historical significance. It is one of the growing cities in terms of business and development too. So to facilitate people and engage them to gather better knowledge about the place, the government has several websites which give detail information about the place on world wide web. Some of these websites are listed below for reference