Business and Economy in Bageshwar 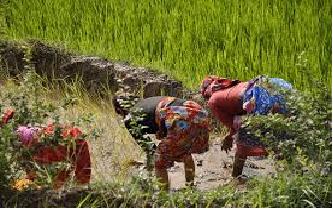 Bageshwar is one of the prominent and popular districts of Uttarakhand. Being a part of the Kumaon division this district came into existence on 15th September, 1997. Bordered by Chamoli district in the north, Almora in the south eastern side and Pithorgarh in the east, it has it headquarters in Bageshwar city. A massive religious significance is attached to the land of this district which makes it a holy location for many devotees. It is believed by the Hindu clan, that Nilaparvat based in the midst of Saryu and Gomati rivers, is the abode of 33 crore Hindu Gods and Goddesses. As per the Puranas it is the land of Lord Shankar and has the greatest religious value.

The main mode of business in Bageshwar is the agricultural business or the industries based here are majorly agro based. However, it may be noted that Bageshwar holds a deficiency of bigger industries and the people mainly do small scale business.

As stated the major occupation of the people of Bageshwar is farming and agriculture is the most profitable business here. It may be noted that net cultural land is not much in Bageshwar considering the length of forested land and non agricultural land. There are grazing lands, permanent pastures, barren lands which also constitute a considerable portion. The climate here is sub humid and cold and the soil type is sub mountain, meadow and skeletal. For agricultural this may be not be the best conditions but there are some crops which grow quite good in this areas. The major crop cultivated in this area includes wheat, maize, paddy, Barley and finger millet. There is a small amount of production of lentil , urd, soyabean, mustard and sesame too. Major fruits grown here include jamun, amla, mango and leechi. Among the less grown fruits there are walnut, pear, apple, apricot, plum, citrus etc. The total area in hectares involved in fruits cultivation is quite low too. Among vegetables potato and onion are the major cultivated ones and among cereals there are rapseed, pea, masoor, bajra and manduva. There are some land which can be cultivated twice which increases the gross cultivated area.

Livestock farming is also quite popular in Bageshwar. There are various animals which are bred in this area. Some of these animals include buffaloes, goats, sheep, pigs , horse, mule and cattle which include both crossbred cattle and local cows. There is a considerable stock of poultry too. All these animals are used for milk production, wool production, meat and eggs supply and various other activities.

Apart from livestock, fishery businesses have also grown to be a prominent business in the last few years. There are plenty of ponds in the district and the fish farmers use them for the business. It may be noted that the total water spread covers an area of around 17,000 sqm, where the total production yield is around 78quintals. The common fish species found here are mahsheer, common carp, grass carp, silver carp Singhara and snow trout. However, the fisheries department, Bageshwar is taking active interest in increasing the business by including more farmers in this business and giving them proper training and helping them with all facilities.

To promote agricultural business there is Agricultural Science Center Krishi Vigyan Kendra who provides necessary help in regards to knowledge on farming, information on pesticide, soil, seeds, fertilizer and what crops should be cultivated. Agro-based industries are also quite popular in this part of Uttarakhand state. There are almost eleven grain processing unit in the district.

Industries are not much in this part of the state. Bageshwar is majorly a place of small-scale industries with no large or medium scale companies based here. Public Sector Undertakings are also not there in Bageshwar district. Small scale industries have a considerable contribution to the economical growth of the district. Since the area is majorly a forested land with availability of deodar, burans, lantana, banj and chir trees, the wooden handicraft and furniture works are quite popular here. Export industry has some exposure here since forest based products are exported from Bageshwar which includes medicinal herbs, lisa, aromatic herbs and even woolen products.

Apart from this there are other industries which include readymade garments, silk and thread based clothes, chemical based companies, metal based companies, engineering units, repairing and services companies and others. Among the service companies there is much potential present in hospital industry, nursing homes, tyre retreading, automobile workshops, body making of automobiles, dent repairing, painting, cyber café and computer training institutes. All these service providing small companies are present in the district but there is demand for more. Incomes from minerals are also quite prominent in Bageshwar. The major minerals available here are soapstone, limestone, magnesite, granite, uromite, dolomites etc. However, the major mineral available here is raw magnesite. The biggest producer of the same in the district is

Another prominent industry in Bageshwar is the tourism industry. Being an important religious place it attracts devotees from various places across the country. This has a direct positive impact on the hotel industry, transport services, food and restaurant business and market places of the district. People travelling here and investing in using various services means more growth and economical upliftment of the district.

Bageshwar in a nutshell is not a industrial town and is completely devoid of any major industries. However, there is potential for lot of more SMEs. The major constraints hitting the area to be more industrially developed are absence of best infrastructure, low connectivity, communication problem, lack of entrepreneurship, shortage in skilled professionals, marketing fallacy and poor technological usage. However, the constraints are recognized by the people of the government and initiatives are taken so that these fallacies can be demolished for a rich and economically progressive district.