Culture is the essence of any location and it is majorly formed by the belief and faiths of the people living in that area. To understand the culture of a city or state it is absolutely important to know the livelihood of the inhabitants there. Bageshwar is a place located in the Kumaon division of Uttarakhand, as a result of which the rich culture and heritage of the Kumaon clan has some influence on the people living here. The tradition and the customs maintained here for years have been an essential part of the natives and they strictly follow the same. 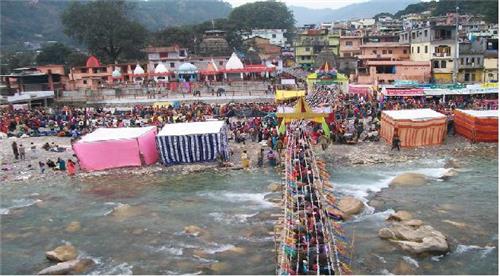 The spirit of cultural activity in Bageshwar can be hugely experienced from the functions and festivals much famous of this area. In Bageshwar, festivals are not only a medium of expression or a platform of religious and social gathering and cultural exhibition but it is a medium of sustaining the cultural heritage, the folk culture. It is also a common point of economic activity, especially because the nature of living here is mainly on a hilly terrain where the medium of communication with other community is very rare and this kind of gathering is only way of marketing goods and maintaining socialism. One of the best mode of such activity is the annual fairs, popularly known as “Mela” which usually remains in connection with religious views, faiths and hereditary customs.

A little information on the customs and traditions of Bageshwar gives a clear picture of the way of life adopted by the people here. Some of this customs and festivals are listed below:

Vishuvati or Bikhauti
One of the prominent and oldest festivals celebrated in Bageshwar is Vishuvati or Bikhauti on the day of solstice, termed as Mesh. This is a day of celebration but majorly for few clans namely Brahmins, Shilpkars and Kshatriyas. Special meals are prepared on this day which includes fried cuisine, betel- leaves, sweetmeat, etc. Bara is a traditional food enjoyed during this time. Apart from delicious cuisines the natives also indulge in other modes of entertainment which includes singing of Pahari songs and playing Hurka, a traditional drum-like instrument. Fairs are also held on this auspicious day which is quite enjoyed by the natives. Some of these fairs are named as Dwarahat, Chaugar, Syalde, and Lohakhai.

Vat Savitri Amavasya
This is a festival which is specially celebrated by the women. They fast on this day and hear stories of Savitri and Satyavan. They are worshipped under banyan tree where the figures of Satyavan, Yamraj and the jewels of Savitri are pulled in to offer prayers. Various rituals are followed in celebration of the day.

Harela
Harela is a celebration before summer solstice which happens in the month of July and August. This is a 10-11 day celebration where several customs are followed, that includes putting soil in beautiful bamboo pots and then making a bed-like structure with various grains like horse bean, paddy, maize, etc which are sown and kept out of sun. This ritual is named as Hariyala.

Simha or Ghrit Sankranti
Simha is also named as Olagia. There is a huge historical importance to this festival. During the reign of the Chand rulers, there is a ritual of presenting gifts to the royal court on this day. People of all clans used to come forward to offer anything and everything to the highest authority which includes flowers, fruits, vegetables, butter, ghee, milk, curd, sweets and many other things. Craftsmen and skilled handiwork professionals come forward to offer as well as exhibit their exclusive works on this day. This ritual has some resemblance with the custom of offering gifts to the British on the special day of Christmas. This festival is often called as Olag or Ghrit or Ghee Sankranti. In this festival nowadays custom of having more and more ghee with bread and horse bean is much popular.

Sankhast Chaturthi
Sankhast Chaturthi is a typical custom of fasting followed majorly by the women of the area. This is a fasting done in honor of the Hindu God Ganesh. This fasting is done on the fourth day of the Hindu month Bhadra or English month August and September. Food is taken only after moon is visible.

Haritali Fast
This fast is again kept by the women of Bageshwar for the welfare of their husbands. They pray for prosperity and long life of their better halves. This fast is conducted on the day before Sankhast Chaturthi.

Doorvashtami
This is another day of fasting celebrated on the fourth day from Sankhast Chaturthi in honor of Doorva Devi and for better life and prosperity.

Kojagar
Small Diwali is celebrated on this auspicious day which happens to fall on full moon day in the month of September to October. Goddess Laxmi is worshiped on this day and small decorative lamps are lit as a mode of celebration. Women do fasting and pray for prosperity. Special cuisine is prepared, mainly Pakhwan and sweetmeat to enjoy on that day.

Nanda Asthami
Nanda Asthami falls on the eighth day of Aug-Sep and continues for a month. During this period many devotees fast and pray to Goddess Laxmi for prosperity and good health. This is an ancient ritual followed from the time of Chand rulers and in Almora it is still celebrated in a grand way. Fairs are organized in Bageshwar during this time.

Ghughutia
This is an ancient festival of the Kumaon clan. This usually is celebrated on the day when the sun emerges into the tropic of Capricorn. The believers of this festival take a holy bath in Rameshwar, Bageshwar or Chitrashila and makes special figure out of gur and flour and calls it Ghughutia. Several fruits are also used and the next morning crows are invited to eat them. The natives call this ritual “Kale Kauwa”.

Uttaraini Festival
The largest and biggest festival conducted in Bageshwar is the Uttaraini Festival. It is celebrated in the month of January and continues for a week. Various sellers and traders come to this fair including the Almora traders, Bhotiyas, for more business. Apart from this the fair remains crowded with people from far away villages and even tourists who encourage buying and selling of products. The major things available here includes ponies, furs, sheep, borax, shoes, Yak tails, goats, musk pods, fruit dried and fresh, salt horns and books.

Apart from the above mentioned celebration Bageshwar also encourages the popular festivals of the country which includes Rakshabandhan, Holi, Diwali, Dusshera, etc. Since the population is well divided between various caste and creed, celebration of ritual and customs are not confined to Hindus only. The Muslim and Sikh festivals are also celebrated with equal zeal and enthusiasm.

In Bageshwar there is a huge place for music and dance in the life of people living here. Indeed they love the folk music and encourage the same at various social occasions but they also love classical dance called Chaachari which are often performed at various ceremonies. The people here, especially the women, love to wear jewellery of gold and silver and even of other cosmetic materials. Another popular mode of cultural activity is dhol nagara which is a special act combining drum beats, music and dance. This is also quite popular n various social functions. There are small schools to encourage music learning and also formal schools encourage the practice of other modes of music, dance and art, apart from usual education.

Handicrafts are also quite popular here. People do quality works using copperware which is much famous in the city. Coppersmiths have been working in the city for generations and making the best of goods. There are availability of weaved carpets and woven baskets which are indeed items for collection. Hand woven products are much popular here.

Another notable aspect of the houses of Bageshwar which depicts its culture is the beautifully decorated houses with Alpana and multi-colored Rangoli. They make specified designs on the welcome gate to bring in positive energy to the minds of the guests. Even the windows and walls remain painted with various figures of Gods and Goddesses in multiple forms.

Culture of people in Bageshwar is varied and filled with religious and traditional customs. They give immense importance to the spiritual aspect and encircle a lot of their activity around it. But this does not mean that they remain far away from modern outlook of life and are unaware of the modernization of the world. Modern education, better lifestyle all are accepted and implemented by the people of Bageshwar with full enthusiasm without forgetting their roots and rich tradition.