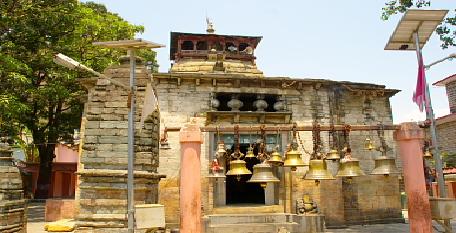 Bageshwar is one of the quintessential pictorial districts of Uttarakhand. Based in the serene Kumaon division of the state this district is one of the prominent districts of Uttarakhand, “the Land of God” in terms of scenic excellence, snow clad Himalayas, famous pious shrines, attractive adventurous spots and magnetic beauty of nature. It is truly one of the best tourist spots visited by millions of tourist round the year.

Bageshwar is primarily famous for the innumerable temples that glorify the place and becomes its token for fame. It is mainly considered a religious venue with multiple temples and pilgrim centers which attract devotees from across the country. Some of the famous temples here are:

Situated at the heart of the city, at the confluence of Gomti and Sarayu river,s is the ancient Bagnath temple dedicated to Lord Shiva. According to the mythological stories about this temple, Lord Shiva visited the place in the form of a tiger or Bagh to meet the great sage Markandey. It is in this reference that the historical temple got its existence and the town got its name. This sacred pilgrim centre is an ancient construction by the famous Laxmi Chand of the Chand dynasty around 1602 AD. Apart from religious significance the specialty of this temple is its ancestry artwork and its idol which is probably made during 7th century to the late 16th century.

The temple is one of the most famous shrines of the area. Especially during Shivratri a huge celebration is conducted here by organizing a grand fair and thousands of devotees coming on this special day to offer their prayers. Even the month of Shravan is also quite significant with special pujas for Lord Shiva occurring during this month.

Based close to the Bageshwar town, at a distance of 1.5km lies the beautiful Chandika temple dedicated to Goddess Chandika. The most sticking feature of this temple is the fact that it is positioned at the top of a mountain giving a picturesque view around. The temple remains a centre of activity during the Navratras when special puja is conducted here and many devotees come to offer their prayers.

One of the prominent temples of Bageshwar, Shri Haru Temple is located at a distance of 5km from the heartland of Bageshwar city. According to the locals a huge religious significance is attached to this temple and this place is so sacred that prayers here with true heart never goes in vain, and that is the reason why people from far away places comes here to get blessings. The auspicious day of Vijay Dashmi is quiet prominent here as huge celebration is done along with a grand fair on that particular day.

Situated at a distance of 8km from the Bageshwar town, this particular sacred place is located in a cave measuring 20 x 95 sq. mts. The temple is dedicated to Lord Shiva and the locals have huge faith in this temple.

Situated at a distance of 26km from the main Bageshwar town this particular temple is dedicated to Sivavaidyantha which is another name for Lord Shiva, the Lord of Physicians. The location of the temple is very near to the confluence of Gomti and Sarayu rivers. It is stated that the temple was first constructed by the Kumaon Katyuri king during the period of 1150AD. The Katyuri dynasty ruled the land during the period of 7th century to 11th century AD with Baijnath as their capital. During that time the area was named as Kartikeyapura in the Katyur valley. The main temple inside the premises has an idol of Goddess Parvati, in black stone. Since the temple is sited on riverside, with the orders of Katyuri queen, the shrine is beautified with flights of steps made of stone. The temple of Bamani on the way to the main temple is definitely worth a visit. Actually the premises have host of small temples dedicated to Brahma, Surya, Kuber, Chandika, Parvati, Ganesh above all Lord Shiva. According to Indian mythology, Lord Shiva and Goddess Parvati got married at this venue.

Maha Shivaratri is the major festival conducted here. Thousands of visitors gather here on that particular occasion. Just before the temple there is a “Golden Mahaseer” which is a lake full of fishes and a major tourist attraction.

Other Sightseeing Spots in Bageshwar

Based on Bageshwar Chaukori road, this is a picturesque location at a distance of 25km from the main Bageshwar town but is based in Bageshwar district itself. Kanda is a tehsil of Bageshwar district. The most attractive feature of this place is its magnetic natural beauty with the mesmeric Himalayas which attracts the tourists visiting the district. An ancient temple of Goddess Bhadrakali is also based here which is quite famous and a must visit for all tourists.

Another hill resort with exceptionally brilliant scenic extravaganza is the small yet prominent place Vijaypur. Based at a distance of 30kms from Bageshwar town this is a place for the nature lovers. One of the best views of the snow-capped Himalayas are available from this location.

For all the adventure lovers, nothing can be more exciting than trekking on the admiring tracks of Pindari Glacier. Located in the Bageshwar district, this glacier trek is around 3.2 kms long and 1.5 kms wide and based at an altitude of 554 mts-3860 mts. The best time to go for an adventurous ride for this trek would be anytime avoiding the winter season (December to March) and the monsoon season (July-August).

One of the most accessible and easily trekable is the Pindari Glacier. In fact trekking in the country is absolutely incomplete if a trekker hasn’t done this one. Located between Nandakot Mountains and Nanda Devi Peak, this is an alluring location for trekkers of all age. Situated at an altitude of 3353mts, this is located on the left side of Kafni Glacier. The major attraction of this trekking route is the unmatched scenic beauty and its easily accessible route. The most astounding location in this trekking route is the zero point which is located at 3660 kms at a distance of around 5km from Phurkia.

The word Sunderdhunga means a valley covered with beautiful stones. Situated on the right side of the famous Pindar Valley this is an equally popular location for the tourists. However, trekking through Sundardhunga glacier is much difficult in compared to the Pindari Glacier or the Kufni glaciers. The famous peaks which are visible while traveling through this route are Tharkot, Panwalidwar, Maiktoil and Mrigthuni. The altitude here ranges from 554 mts to 4320 mts and best time to visit the same would be anytime avoiding the winter season (December to March) and the monsoon season (July-August). The main attraction of this place is the beautiful scenic beauty, cascading waterfalls and the thick forested areas with rich collection of varied flaura and fauna.

Famous for its scenic splendor Kausani is one of the best hill stations based in Bageshwar district. The most enthralling and panoramic view of the snow capped Himalayan range is available from here. Based at a height of 1890mts one can view Someshwar Valley, Garur and Katyuri valley from here. The two prominent places to visit here are the Anashakti Ashram of Mahatma Gandhi, who referred Kausani as the “Switzerland of India” and stayed here in 1929, and the famous Pant Museum.

Pandusthal is a prominent and significant place to all those who gives immense importance to Indian mythology because according to it this is the place where the Pandavas and the Kairavas of Mahabharat fought for a stretch of hilly track.

Places to Visit near Bageshwar

It would be wrong to conclude that the scenic extravaganza begins and ends in Bageshwar only because there are some of the best tourist spots around the district which is equally captivating and a must visit for all travelers. In fact excursions from Bageshwar are much popular among vacationers here. Some of the best spots in close proximity to Bageshwar include:

One of the most captivating tourist spot near Bageshwar is the tiny village in Pithoragarh district named as Patal Bhubaneshwar. The key attraction here is the limestone cave temple which is around 14km from the beautiful location of Gangolihat. Based around 1350meters above sea level the cave is around 160 meters in length and around ninety feet deep. Even the walls of the cave are designed with spectacular carved rocks believed to be resembling thousands of Gods living here. According to Indian mythology a view of Patal Bhubaneshwar is a result of pure works and meditation at religious points like Kedarnath, Baidyanath and Kashi. The cave is huge with four entrance gates named as Mokshadwar, Dharmadwar, Papdwar and Randwar of which the latter two were closed after the death of Raavan and end of Mahabharat war.

Patal Bhubaneshwar is a pious shrine dedicated to Lord Shiva. Thousands of devotees visit the place every year to offer their prayers and special celebration is conducted during Shivaratri. The pilgrim centre is around 67kms from Munsiyari, a beautiful hamlet of Pithorgarh district and about 51kms from Bageshwar.

Didighat is based at an altitude of 1725 meters near Pithorgarh district of Uttarakhand. As per the history, it was initially ruled by the Raika Malla kings of Sirakot which, however, in the later days were shifted to the control of Chand rulers during 1449AD. Verdant valleys, awe striking ridges and a versatile collection of flora and fauna are the exceptional beauty of Didaghat. The place is based at a distance of 76kms from Bageshwar town and it is also on the way to the famous pilgrim center of Kailash Manosarovar.

Situated at a distance of 18km from Bageshwar town this beautiful location is famous for the scenic excellence as well as the famous Bineswar temple dedicated to Lord Shiva. The beautiful place is based at an altitude of 2412meters giving a splendid view of major peaks including Panchchuli, Kedarnath, Nanda Kot, Nanda Devi and Chaukhamba. It’s a beautiful tourist spot away from crowded city affairs in nature’s lap.

Located in the Kumaon division adjacent to Bageshwar district is the beautiful Almora district, an ideal example of picturesque location with exquisite scenic beauty. The main attractions of Almora is its magnificent scenery, gigantic snow capped Himalayas, exquisite wildlife, cultural heritage, multiple tourist locations and mouth watering cuisines. Almora district was excellently maintained by the rulers of Chand dynasty and later on the beauty of the place have been further developed by the British rulers. The place is quite famous for its exquisite beauty and also for being the place of meditation for Swami Vivekananda. The distance of Almora from Bageshwar is around 76kms.

How to Reach Bageshwar

Bageshwar is a place which is easily connected with all modes of transport. Pantnagar is the nearest airport to Bageshwar from where one can fetch private taxis to travel to Bageshwar. For railway travel one has to reach Kathgodam which is the nearest railway station to Bageshwar and from there private cabs are available. Similarly for road travel there are UTC buses to reach Bageshwar at much cheaper cost and much less time.

The best way to enjoy the beauty of this place and the nearby areas is by accepting the services of a travel agent or a tour operator who guarantees a hassle free tour for every individual as per their preference. Some of these travel agents operating in Bageshwar are

Though Bageshwar can be visited round the year but the best time would be in the months of February to April and September to November. The summer season during May to July can be a little humid being unfit for sightseeing and the winter season from December to February are usually quite cold and uncomfortable. However, heavy woolens are advised in winter months to make the stay comfortable and more enjoyable.